In 2013 the third season of excavations of the Department of Classical Archaeology of the Institute of Archaeology, Jagiellonian University (JU) in Kraków, Poland, took place within the Paphos Agora Project, which aims at the exploration of the Agora of ancient city Nea Paphos, the capital of Cyprus in the Hellenistic and Roman periods.

The exploration works of the 2013 season were conducted between Aug. 12th and Sept. 20th. The team led by Professor Ewdoksia Papuci-Władyka comprised nearly 40 persons, including the staff of the Institute, doctoral students, graduate and undergraduate students doing their field practice, and volunteers. The campaign's aim was not only to excavate and provisionally elaborate the uncovered material, but also to make a preservation work performed by member of the Institute's staff, associate professor Marcin Biborski. The latter consisted of cleaning and conservation of metal artefacts discovered during the previous seasons, and kept in the Paphos District Museum. Of particular importance was the cleaning of coins, which – together with pottery – are key elements for the chronology of uncovered architecture and other objects. They have been elaborated by associate professor Jarosław Bodzek.

Excavations were conducted in Trench II, which has been researched ever since the first season. This trench is located in the central part of the eastern portico of the Agora, by the entrance to the square from the east. This year it was extended to the south, where new rooms were uncovered; the total number of rooms uncovered reached 15. A majority of them had been most likely shops (tabernae) situated by the eastern entrance of the Roman Agora. In the northern part of  Trench II exploration was completed in rooms 6 and 7, reaching bedrock. Architectural structures (walls, floors, etc.) were uncovered, dating most likely to the Hellenistic and Early Roman periods.

Main works were conducted in the southern part within rooms 3 and 5, whose exploration had begun the previous year, and in the newly uncovered rooms 13-15. Architectural remains belonging to several building phases were found: Phase I – Hellenistic period; Phase II – rebuilding in the time of Augustus, probably after the large earthquake in 15 BC, when the first phase of the Roman Agora portico was constructed; Phase III – rebuilding after the earthquake in the 70s AD; Phase IV – rebuilding after the earthquake (in the time of Traian or Hadrian?), when the last phase of the Agora portico was constructed, the one that is most clearly visible now when entering the Agora. The chronology given above is clearly only provisional, and needs to be corroborated by pottery, coins and further exploration.

The exploration results in Room 13 were particularly interesting. Here, the earliest structure uncovered so far is the cistern with rectangular entrance. It appears that the cistern is earlier than the earliest phase of the eastern portico of the Agora, therefore it should be probably dated to the Hellenistic period. Such chronology is suggested by pottery and coins uncovered until now (but the exploration of the cistern is not yet complete). When the foundations of the eastern portico of the Agora had been built, most likely in the time of Augustus, the western wall of the cistern was disassembled; later it was erected anew (in different technique), and it formed part of the portico foundations.

In the 2013 season new trench (Trench III) was opened. It is situated not far from the southern portico of the Agora, and north of it. It aims at checking whether there had been any structures earlier than the Roman Agora here. Ten walls, fragments of two floors and other architectural structures were uncovered. The analysis of pottery found in the lowest layers by the walls indicates that some of these structures had functioned in the Hellenistic period, and were covered by thick layer of Roman levelling. As for now we are unable to assess whether the structures in question had been connected with the Hellenistic Agora that we are looking for. In order to answer this question, exploration of Trench III ought to be continued in the following season.

Not only archaeologists and professionals mentioned before took part in this year's fieldwork, but we were joined also by two geodesists. They took measurements and processed the data, performed photogrammetry and helped in the creation of the digital elevation model of the site (DEM). After the termination of the fieldwork, photos were taken from above by the so-called quadrocopter, equipped with digital camera. Preliminary results of this procedure are very promising.

Data gathered during the three years of exploration will be analysed and elaborated in Krakow, and they will serve for the compilation of the first preliminary report from our works, which will be sent for publication in the Report of the Department of Antiquities, Cyprus. 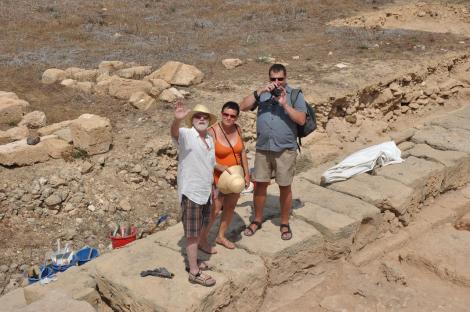 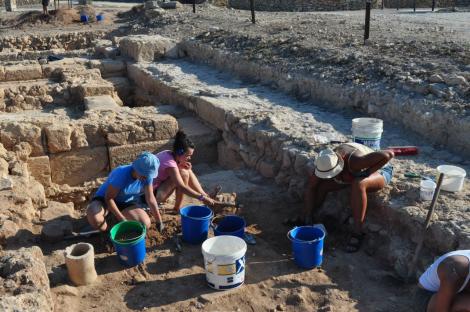 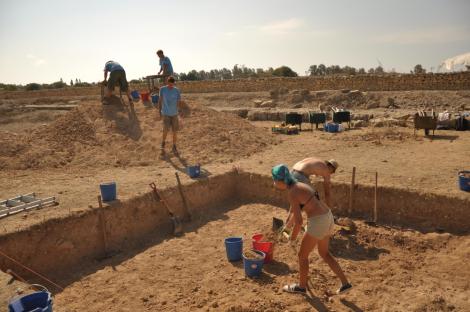 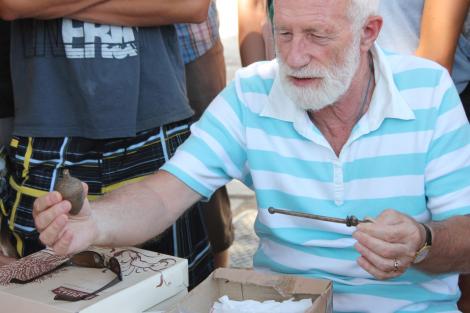 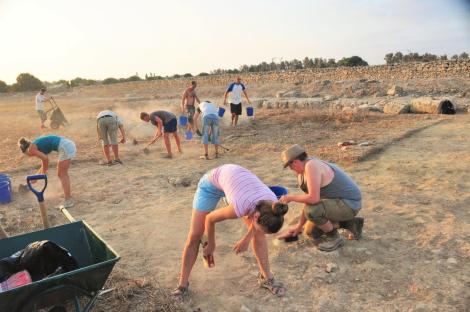 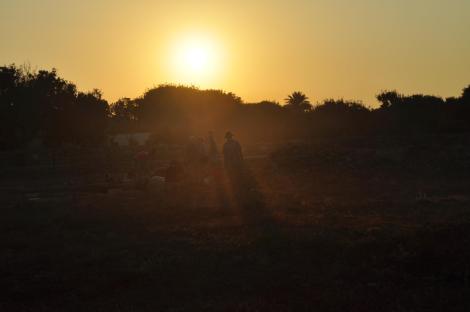 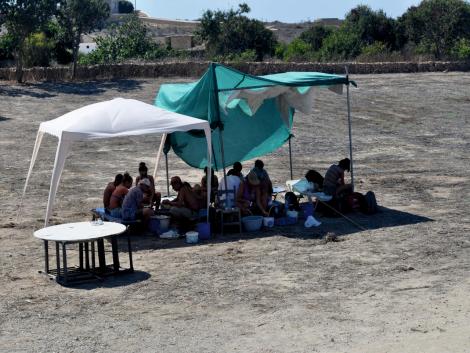 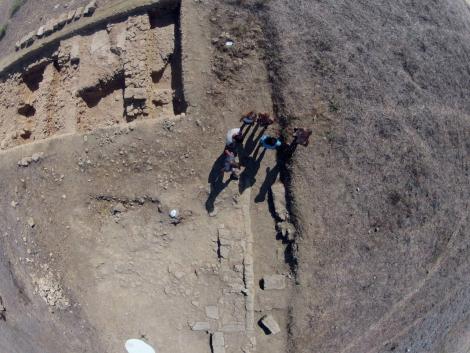 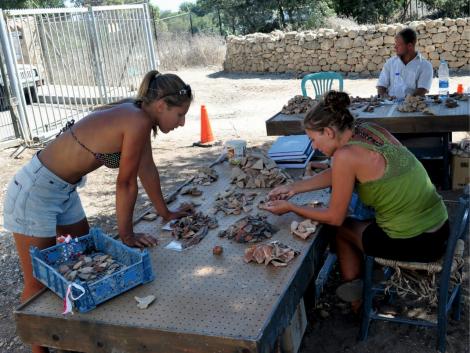 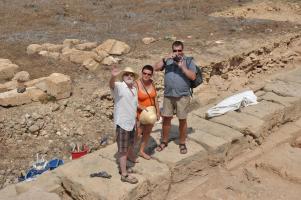 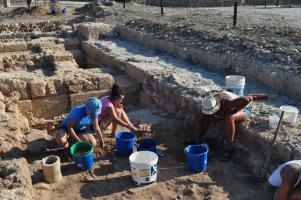 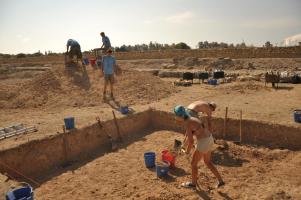 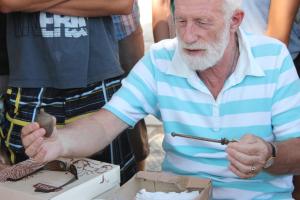 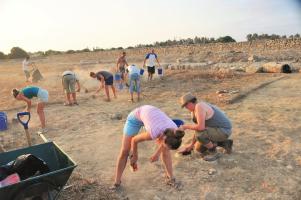 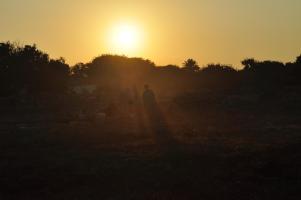 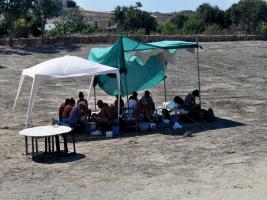 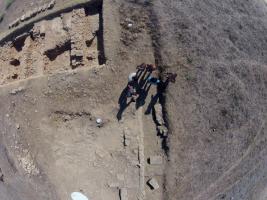 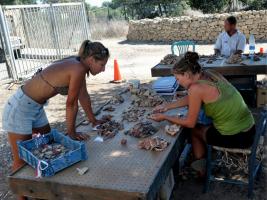 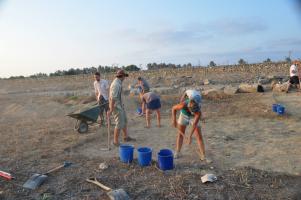