The season 2015 works were conducted between Aug. 19th and Sept. 27th. The team led by Professor Ewdoksia Papuci-Władyka comprised more than 70 persons (35 staff, 24 student trainers, including not only Kraków university students, but also some from Warsaw University, 13 volunteers - all participants in various dates).

The excavation work took place in the Agora in all three already existing trenches and in a new one traced at the south-eastern corner of the Agora square just outside of it. In Trench I, the main aim was to look for the continuation of the external walls of Building A and also, of the internal walls of its rooms. The south-west corner of this building was cleared and the continuation of its southern wall to the east was uncovered, but the south-eastern corner was not found: it is probably situated further to the east. This fact shows how large this structure is (the uncovered length of the south wall is now 16m). It should be emphasised that we still do not know what Building A looked like at its beginnings, where the entrance was and what its dimensions were, so further work is needed there. Because of new prospect of our research,  works have been undertaken in Trench II in the east portico, where trade activity of the Agora focused, at least in Roman times. The northern parts of Rooms 10, 11 and 12, party excavated in 2012, have been explored, as well as Room 1. As a result, we can point out a better understanding of the spatial organization of the portico. It seems that it functioned, at least in Roman times, as a place to trade, and it had been isolated from the Agora itself by the wall: it was open to the outside of the Agora, facing the street running from the Agora to the east, at the theatre direction. In Trench III, the eastern part of Room 1 in Building B was uncovered, and in the upper layer of the fill, a very well constructed, marble column capital (broken in two fitting parts) in Corinthian style was found. The above mentioned new Trench IV (25m2) was opened in the only accessible corner of the Agora where research is permitted since in the other corners, modern roads have been built. Works in this place had to attempt to verify the dating of the east portico of the Agora obtained previously in Trench II. However, Trench IV has not been explored this year to any deep extent because of the huge amount of movable material (inter alia deposit of pottery of early Roman times including some amphorae, bronze bowl and fragments of harness) and architectonic structures found there. But it is very promising for future research.

Aside from the archaeological exploration, the conservation work of the coins and metal objects was continued  by members of our team in the District Archaeological Museum in Paphos, as well as, the development of these materials.

One of the aims of the 2015 season was the geophysical research. It was done by specialists from Hamburg University (over a short period of time: 21-24.09) on ten grids of the total area 7275m2, in direct connection with trenches I-IV of the ongoing excavations and in the terrain south of the Agora. The research aim was first to check the capacities of the  Sensys Magneto-Arch"Magnetometer used for the research under local conditions; secondly, to determine structures. As a preliminary result shown by the processed and mapped data, some different (archaeological) structures in both areas were localized, but further processing of the collected data is needed. The prospection will be continued next year over a much greater area.

Three other groups of specialists worked, too. One (JU and freelance geodesist) performed the geodesic measurements in all four trenches and established the geodesic warp for all the Archaeological Park for future non-invasive geophysical research. The second group (AGH University of  Science and Technology in Kraków) was tasked with performing an inventory of newly exposed architectural structures using Faro Focus 3D scanner. The third group (JU and Warsaw University of Technology) had to accomplish two tasks: to prepare the documentation for air photography of the site in order to create orthophotomap and test the usefulness of close range photogrammetry for current registration of the explored archaeological contexts.  The result is an orthophotomap, whose initial version has successfully been developed, as well as, the Digital Terrain Model (DTM ), which provided a lot of new information about the spatial layout of the city; also, the usefulness of close range photogrammetry was proved.

Finally, the geoarchaeological studies have been undertaken by specialists from the Institute of Geography, Jan Kochanowski University in Kielce (17-27.09) in the river valleys of Koskinos and Ezousas. Received data will be used for reconstruction of the sedimentary environment of the surrounding area of  Paphos and phases of alluviation which determined the changes in the shoreline near the Paphos archaeological site.

The project runs under the patronage of the Embassy of the Republic of Poland in Nicosia and the Ambassador, Barbara Tuge-Erecińska visited the site in 17th of September. 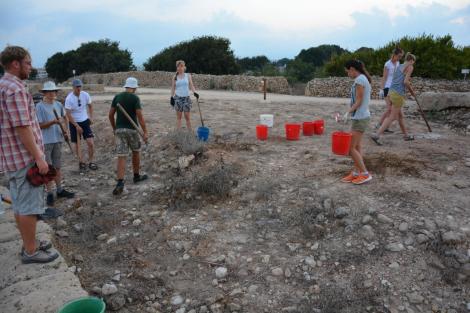 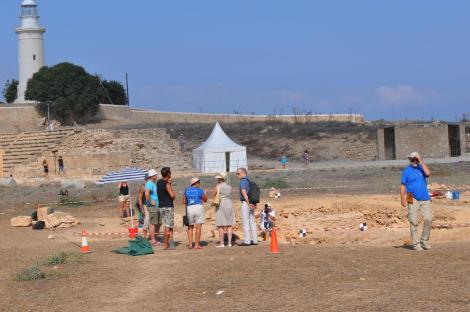 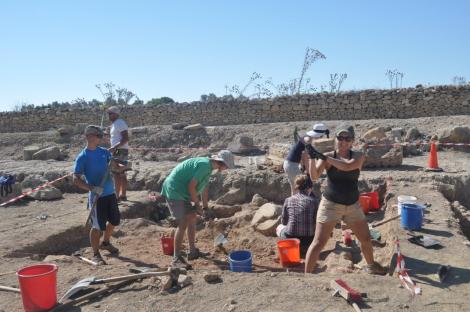 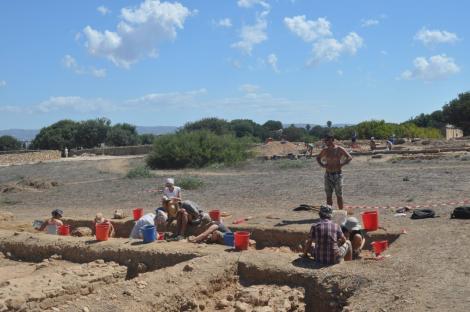 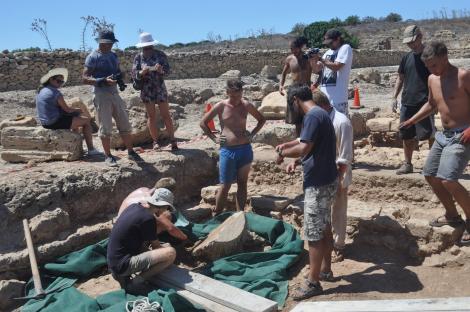 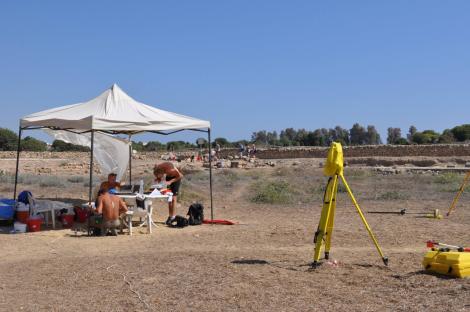 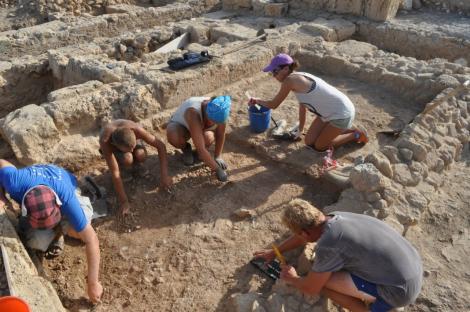 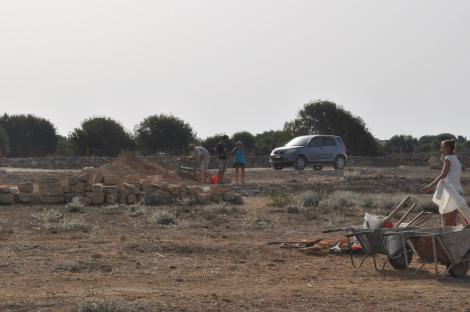 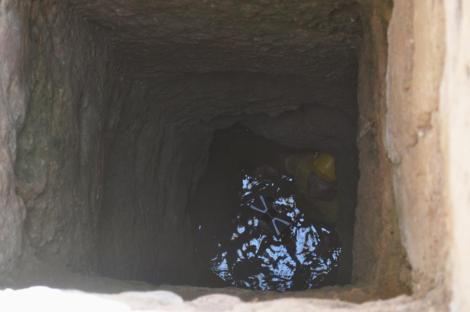 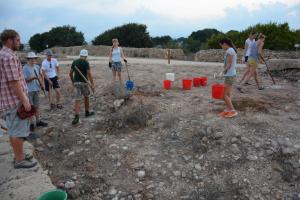 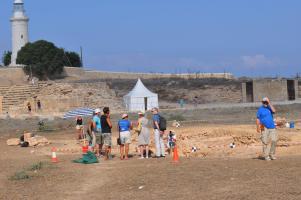 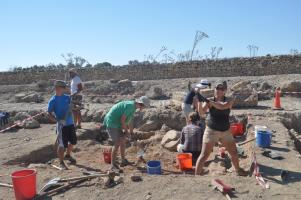 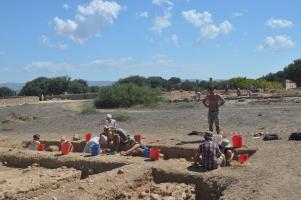 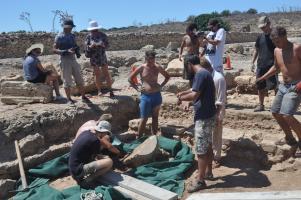 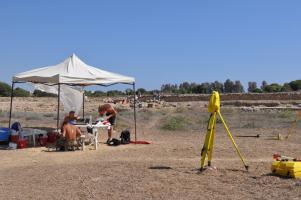 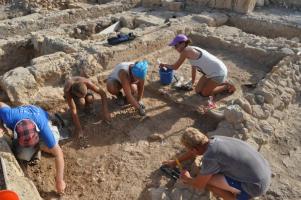 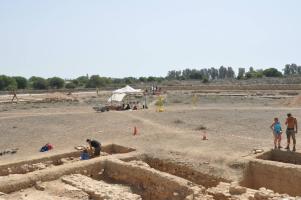 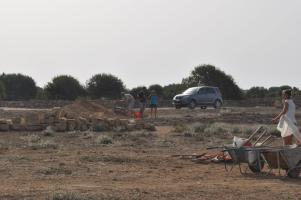 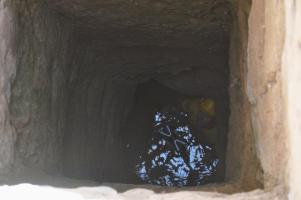