During 2016, the research of the Department of Classical Archaeology, Institute of Archaeology at the Jagiellonian University (JU)  Kraków, Poland took place within the Paphos Agora Project led by Professor Ewdoksia Papuci-Władyka. This year was the second season supported by a MAESTRO grant (from the National Science Centre, no 2014/14/A/HS3/00283), which expanded the substantive scope of our work: the research in the Agora and beyond aims to attempt to reconstruct the economic infrastructure and economic activity of the city.

In 2016, two kinds of activities were undertaken. First, in spring the study season took place, followed by a long research campaign in late summer-early fall. The study campaign in the term 30.03-25.05.2016 was devoted to the study of the architecture and all movable material uncovered in previous seasons. This material is being developed to be published in the first book of the series Paphos Agora. Altogether, 14 people participated, including the illustrator and photographer. Especially important was the analysis of stratigraphy and pottery which aimed to clarify the development phases of the researched area. Also, the conservation work took place at  the site and covered the preservation of floors, basins, plasters and walls.

The research campaign had an interdisciplinary character: as in previous seasons, it included regular excavations (sixth season) in the main city square, the geophysical research in the area north-west of the Agora and to a  lesser extent in the Agora itself, the geo-archaeological research, as well as the conservation work on the site and treatment of objects stored in the Paphos District Museum. This year, works were conducted between Aug. 21st Aug. and Oct. 12th (two project members came even earlier). The team comprised 77 persons altogether (24 staff, 16 student trainers, 37 volunteers not only from Kraków, but also some from other Polish cities - Warsaw, Wrocław, Poznań, Gdańsk and Łódź, as well as, from Greece and Cyprus - all participants for a variety of time periods).

This year the decision was taken to excavate five areas inside the Agora itself. In Trench I, the structure S.50 located partly in the main south wall of Building A (S.17) was explored which had been localised and interpreted already in 2015 as a cistern or unfinished well. The well has diameter ca. 0,90m and depth 4.88 meters. Its chronology was very important because it was evidently later than the wall S.17 (and partly carved in one of the ashlars of this wall). The well's filling consisted mainly of pottery fragments dated to the late Hellenistic period (very similar and only a little bit later than the filling of the well S.173 in Trench II). Thus, it confirms that the Building A was in use earlier than the late Hellenistic time. The most surprising finding in the well was a human skeleton found at the depth of ca. 3.5 m. For the moment, it is very difficult to explain this discovery, an  anthropological analysis is needed, which should be done in next study campaign.

In Trench I, an  extension was made to the west in search of the eventual continuation of wall S.17, but the result was negative, instead some slabs were found. The possible continuation of the wall S.17 to the east was also sought, based on observations in the terrain and the results of remote sensing and magnetic prospection done in the previous year. To check this hypothesis, a small trial Trench VI  (2x2m) was marked out ca. 28m east of Trench I and 9m west from the edge of Trench II. The most important result of works on Trench VI was the finding of the remains of a wall of the "compartment type" construction, analogical to the wall S.17 and on its line. It is undoubtedly the continuation of the wall S.17, so at the current stage of research, this wall in the captured line has reached the length of 38.18 meters.

Another new excavation was also found, Trench V, for the purpose of verification of the results of geomagnetic prospection carried out at the Agora in the previous season. Data from this research suggested the existence of two corners corresponding to the layout of the walls uncovered inside the premises of Building A in Trench I, and in addition, the existence of another building located in the north-eastern part of the Agora. The results of work in Trench V have only partly confirmed the data coming  from magnetic prospection: the corners have been found, but both their location and course differed somewhat from the geophysical image. The uncovered remains of building with many rooms should be dated to the Hellenistic period. Its relation to rooms uncovered in Trench I should be studied in future.

The widest range of works were  undertaken in Trench II, where the exploration continued within the Room 15 (R.15, explored partly in 2013) and south of it in the area with a length of ca. 25m and width approx. 5.5 m along the crepidoma of east portico of the Agora (S.100). A range of newly appointed rooms: R. 16, 17 and 18 was unveiled (towards Trench IV). The most important discoveries came from R. 15 and 16. In the first space on uncovered floor, two intact glass vessels, which had avoided destruction (probably caused by an earthquake) were uncovered, because they were deposited in kind of box, whose iron handle? has also been found. Two intact oil lamps were found in this context, as well as, fragments of pottery. In the immediate vicinity, two hoards of bronze coins were  encountered, probably originally hidden in a purse. The coins, which probably form one hoard divided into two parts, have preliminarily been cleaned and examined. They date to the emperor Traian reign, but some of them have contra-marks of the  first half of the reign of emperor Hadrian. In next Room 16, also at the floor level, small intact glass unguentarium and a  toolkit of six surgical instruments (five bronze and one iron) was discovered together with the remains of a bronze box. The preliminary research showed that they have analogies inter alia with the famous House of the Surgeon in Pompeii and also in the ophthalmologist office in Lyon. The glass vessels could also be involved with this medical activity, so we have probably found a  surgical office functioning in Rooms 15 and 16. The good state of preservation of all these fantastic finds suggests that the collapsed Rooms 15 and 16 were probably never   rebuilt. Preliminary analysis of the diagnostic movable material from the described finds’ contexts gives evidence to determine their chronology to the years of the reign of emperor Hadrian which could coincide with the earthquake mentioned by ancient written sources and dated by  modern scholars to AD 126. So once again, as in previous years, the research of Paphos Agora Project obtained the final date of the functioning of the east portico of the Agora to second century AD and not to the fourth, suggested years ago by the very meritorious Paphos researcher, Cypriot archaeologist Kyriakos Nikolaou.

In Trench IV, research continued within the two rooms uncovered in the previous season, which have been given numbers R.30 (western room) and R.31 (eastern room). In R.31, the exploration has been finished and bedrock has been exposed. The remains of a probable furnace, foundry crucibles and production waste found in a deep pit situated in north-east corner of the room allowed  a hypothesis that in the period preceding the erection of the east portico, there functioned a workshop related to the casting of bronze to be put forward. The economic character of this area is also confirmed by the huge amount of amphorae and utility ceramics found here. Unfortunately, the main part of this production place was presumably situated further to the north where in later times, a solid wall was built closing  Room 31 from the north, so the exploration here and verification of the above hypothesis will presumably be impossible.

Taking into account the results of research in the western part of T.I, as well as T.V and T.VI, it should be noted that the area of Agora was a place of intensive construction activity dating to the time period corresponding with the founding of the city, as well as later. Undoubtedly, the research season in 2016 with the capital findings of R.15 and R.16 confirmed the great research potential of T.II. In Trench II’s portico, during the last phase of use (in second century AD), not only was trade indicated by the small shops (tabernae) but also, medical activity took place. We hope to reconstruct in the future, the function of other rooms. The 2016 results point also to the statement that it is obvious that in an  earlier time, the spatial organization of the portico in Trench II was different.

One of the aims of the 2016 season was to further develop the geophysical research with magnetic method. It was done by specialists from Hamburg University with more improved instruments that were used in the previous season. Three weeks prospection comprised a huge terrain  situated in north-west area from the Agora and close to the north-western city gate. The main aim was to search for  potential remains connected with the harbour presumably existing here in antiquity, as well as other structures of economic character. Preliminary results are very interesting, inter alia a rectangular structure of approximately 25 m in N-S orientation by 15 m in W-E alignment can be clearly observed and is interpreted as a large building. Also, part of the Agora area was prospected with the aim of comparing  the results with the results obtained from the year before. The collected data is  now being processed and the results will be known before the next campaign, helping in the planning of the following research.

The geo-archaeological research was continued by specialists from the Institute of Geography, Jan Kochanowski University in Kielce in the area around Paphos, as well as in the Archaeological Park. Received data will be used for the reconstruction of the sedimentary environment of the surrounding area of  Paphos and phases of alluviation which have determined the changes in the shoreline. One of the main aims is to verify the hypothesis which  assumes  the existence of a second port of Paphos in this area.

Aside from the archaeological exploration, the conservation work of the coins and metal objects was continued by members of our team in the District Archaeological Museum in Paphos, as well as, the development of these materials.

Preservation work was also done in the field. Restoration was carried out in Trench II R.10, where the preserved floor has undergone a maintenance treatment, after which the structure has been protected in accordance with the relevant guidelines of the restorers. During the season, plaster and scarce remains of wall paintings uncovered on the walls indoor R.15 - R.17, were  also  preserved both by a conservation student from Warsaw, as well as local conservation services. 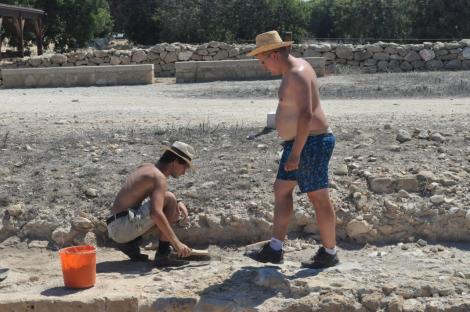 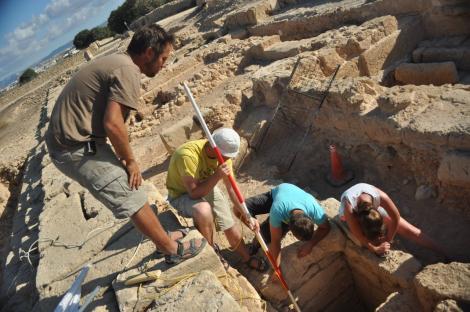 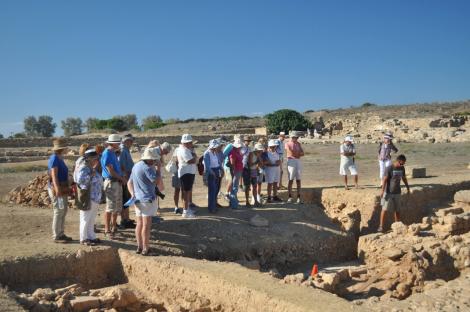 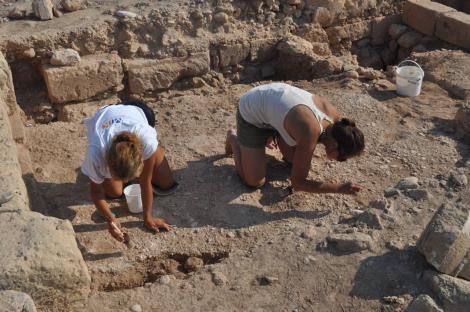 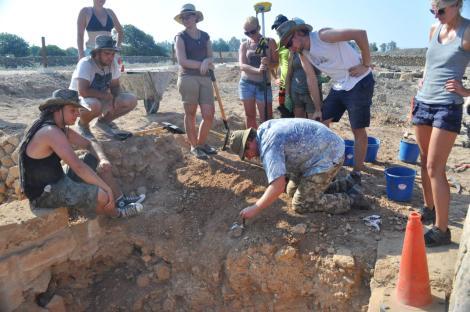 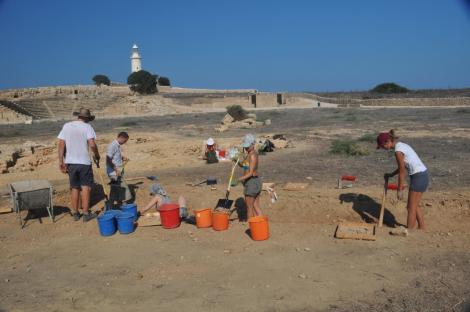 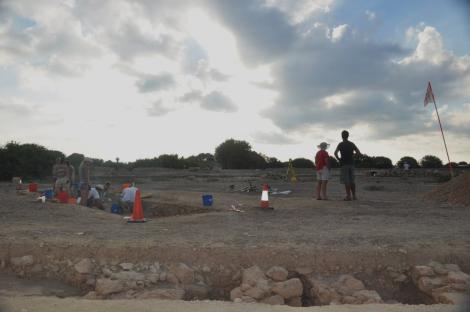 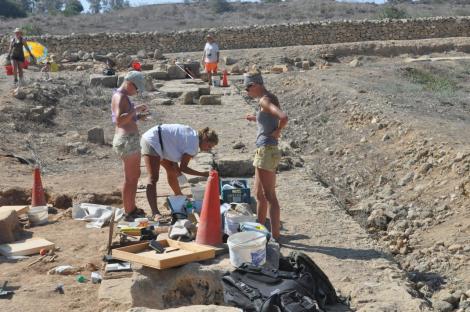 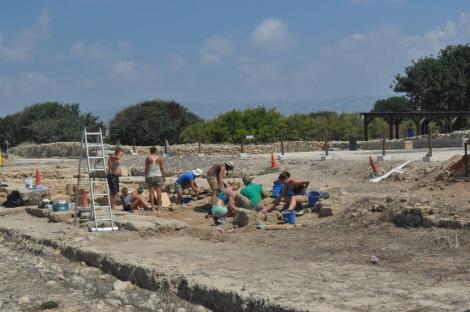 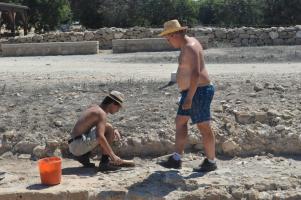 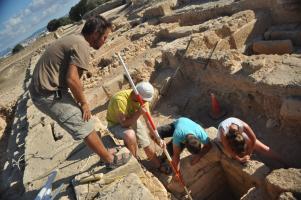 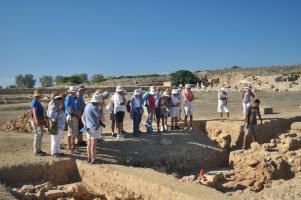 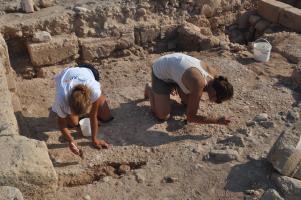 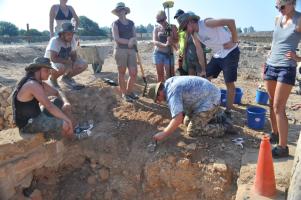 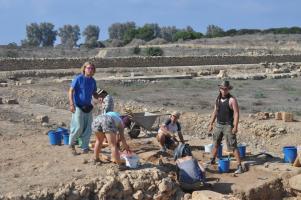 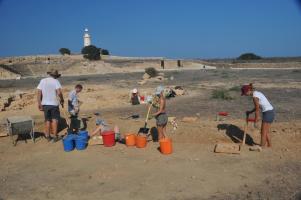 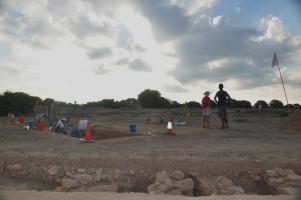 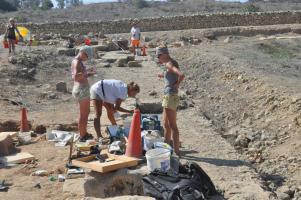 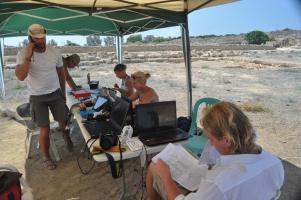 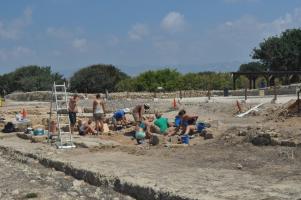