The Jagiellonian University Research on the Agora of Nea Paphos 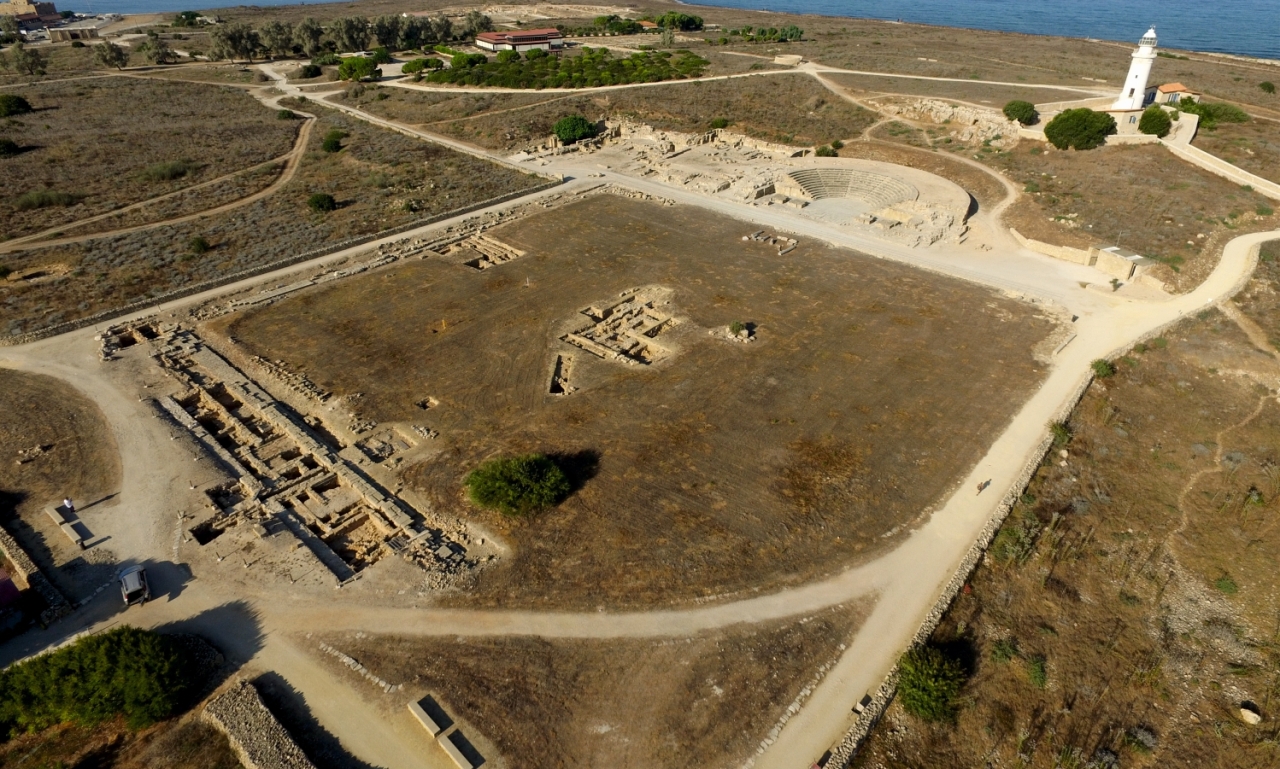 The Agora was the center and the most important feature of every Ancient Greek city. Inside its monumental buildings there were offices of the city administration, shops, workshops, service and religious establishments. Agora covered administrative, economic and religious functions. It was also a place where everyday matters were taken care of, and city festivals were celebrated.

The Paphos Agora was conveniently located in the city center, beneath its Acropolis (Mount Fanari) and within easy reach of the city's port. In the light of Paphos Agora Project's research, it was established in the 2nd century BC. and functioned until the first half of the 2nd century AD. At the peak of its development, it occupied about 2.5 ha, which makes it one of the largest complexes of this type known from the eastern part of the Mediterranean.

The Agora in Paphos was located and studied in 1975-1978 by the Cypriot archaeologist K. Nikolau. During several excavation seasons, he managed to discover the Odeon - a small musical theater that was reconstructed after research was completed. A Cypriot archaeologist also uncovered rooms south of it, which he interpreted as Asclepieon. During his research, part of the crepidome of the porticoes surrounding the inner part of the square was also unearthed, which allowed the researcher to define the Agora in Paphos as a square surrounded by a colonnade with a side of about 100 meters. According to Nicolau, it functioned in Roman times, from II to IV century AD.

After finishing the excavation of the Jagiellonian University on the Black Sea at the site of Koszary in the chora of Greek colony of Olbia (2008) and in Accra, Crimea (2010), prof. Ewdoksia Papuci-Władyka decided to start new research on the Agora of the city of Paphos.

The main goal of the expedition of the Jagiellonian University at the time of starting the work in 2011 was to verify K. Nikolau resoults and to determine whether on the contrary to his proceedings, the Agora of the Hellenistic city was under the remains from Roman times.

It was possible to implement it by finding the remains of Hellenistic buildings such as Building A and Building B, as well as thanks to the stratigraphic analysis of the foundation of the Porticos surrounding the square from the east and south, which allowed to shift the dating of the Agora erection to the Hellenistic period, 2nd century BC.

Grant NCN MAESTRO 6 nr 2014/14/A/HS 3/00283
Pafos - Agora and Beyond: Material ramins of economic infrastructure and activity of the Hellenistic and Roman Cyprus Capital Based on Interdisciplinary Research

The city of Nea Paphos was founded after Alexander the Great at the end of the 4th century BC and functioned for a thousand years, also serving as the capital of Cyprus for several centuries. As one of the most important archaeological sites on the island inscribed on the UNESCO World Heritage List, it has been studied for many years. However, it has never received sufficient attention to its economy and economic activity, which have become the focus of this Maestro project. Our research focused on the Agora, the market place, and in many areas beyond it in the ancient city of Paphos, the location of the current Archaeological Park.

The research was international and interdisciplinary. We conducted extensive work in accordance with the principles of the so-called Total Archaeology. The research was therefore based on historical, archaeological (wide-scale excavations), archaeometric (methods from science, e.g. physico-chemical analyses of ceramics) and geoarchaeological data (research on the human-environmental relationship). In terms of methodology, we used non-invasive prospection on a large scale, i.e. those that do not damage the tested objects: geophysical with the use of a magnetometer and Ground Penetrating Radar, analysis of satellite images and archival aerial photos and our photos taken using drone raids. We used photogrammetry on a large scale to document the excavations. The project applied a modern standard of documentation for ancient urban sites such as Paphos, which also resulted in the creation of the first comprehensive database based on the Geographic Information System (GIS). An extremely important achievement is the postponement of the Paphos Agora’s establishment date to 300 years earlier and the reassessment of its size. Previously, K. Nicolaou established that the Agora was founded in Roman times, in the 2nd century CE,  had the shape of a square closed with porticoes with a side of approx. 97m and an area of approx. 1ha. Research under the Maestro grant led to a serious correction of these statements and the finding that Agora was established as early as the 2nd century BCE with dimensions of approx. 150x160m and an area approaching 2.5 ha. Thus, it is one of the largest agoras in the Hellenistic world, and especially in the Eastern Mediterranean. We have changed the image of the city's origins: in the area where the Agora later operated, we came across various buildings that had been erected there since around 300 BC, which were therefore, from the very beginning of the city's existence. On the Agora and beyond, where we geophysically examined the area of around 18 ha, we discovered many objects related to the city's economy: a building-warehouse, remains of a metallurgical workshop, of objects related to water management, e.g. wells and cisterns that were used to collect water, terracotta pipelines, canals, pools, as well as a lime kiln, numerous streets, a quarry, etc. During the research, a large amount of so-called movable materials was discovered: thousands of fragments and whole vessels of various categories, coins and other metal objects, oil lamps for lighting, terracotta, stone and glass artefacts, animal bones, etc. Extensive detailed, multi-faceted research on this material has brought a great deal of information about the everyday life of Paphos inhabitants, religious beliefs and also showed that some categories of pottery were produced locally in Paphos or in the region. The analysis of ceramics and coins shows a picture of a network of intense trade contacts and importation routes, confirming Paphos' strong position as a port city and capital of the island. They included such trade routes to the Levant, Asia Minor, Egaea (Athens and the islands of Rhodes, Kos, Thasos and others), the Black Sea, Egypt, Italy and in Roman times, also Tunisia and the western part of the Mediterranean Sea (e.g. the Iberian Peninsula). Archaeozoological studies of animal bones have produced extremely interesting results, providing data on the economy of Paphos, the diet of the inhabitants and their relationship with animals.

The holistic research carried out in the project goes beyond the traditional understanding of archaeology and was first used in the study of the ancient city of Nea Paphos, setting, hopefully, new standards. The research has also led to a new direction in the study of Nea Paphos and could become a model for other expeditions and researchers. Equally, it should  be emphasised that the research in Paphos carried out under this grant is one of the few Polish expeditions in the classical Greek-Roman site, thus the greater is its importance for the development of this branch of archaeology. The research also contributed to the training of new generations of archaeologists who have raised their qualifications and gained new ones.

Research conducted under Maestro grant has made a great contribution to the discovery, protection and promotion of the cultural heritage of Paphos and, more broadly, Cyprus.

Grant NCN OPUS 18 nr 2019/35/B/HS3/02296
MA-P Maloutena and Agora in the Paphos Urban Plan: Modeling the Urban Landscape of the Hellenistic and Roman Capital of Cyprus

The aim of the research carried out by the cooperative of the Jagiellonian University, the Center of Mediterranean Archeology of the University of Warsaw and the Warsaw University of Technology is to recreate the street layout and reconstruct the buildings of the ancient city of Nea Paphos, with particular emphasis on the parts previously investigated by two Polish archaeological expeditions - Maloutena and Agora district. The research is carried out by an interdisciplinary research team consisting of archaeologists and architects, but also specialists in geophysics, remote sensing, procedural modeling and spatial analysis. This team undertook the reconstruction of the street layout and buildings of the ancient city of Nea Paphos in various historical periods. As a result, the city landscape and buildings will be reconstructed in the form of 3D models. The models will, in turn, be used for spatial analyzes to examine the relationship between the layout of buildings and streets and the functioning of the city, in terms of visibility, population flow, number of inhabitants, etc.

Find out more about the project in Polish Archaeology in Cyprus